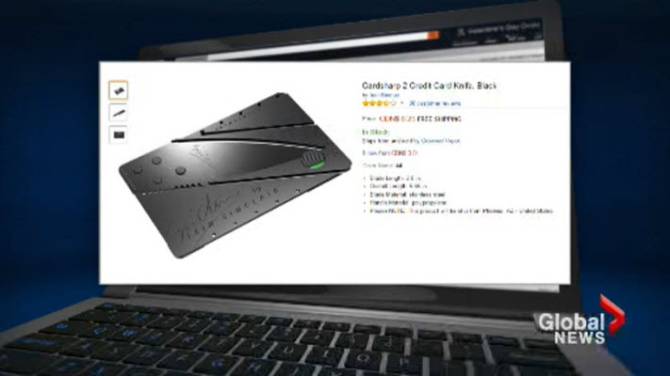 It’s a new threat that security guards at concert venues and other events are keeping a close watch for – a credit card that can be deadly. As Angie Seth reports the so-called credit card knife is cheap, and readily available online.

TORONTO — Security at Toronto concert venues and clubs are on the lookout for a new threat — a knife hidden inside what appears to be a regular credit card.

It looks and feels like a credit card, it is small enough to slide into your wallet, but with the flick of your finger and a couple of folds on the side it becomes a deadly weapon bearing a 5-centimetre blade.

What is also concerning security guards is the credit card knife is available online for anyone to buy, and at a fairly cheap price -– on some sites you can get one for just over $6.

“It has the same shape and weight of a credit card. It’s actually a knife that folds out,” he said.

“The way it works is you pull it out and the wrap the sides of the card around and it becomes a knife. It has a 2 inch blade and it is extremely sharp. Guys are carrying it in their wallets, in their shoes, girls are carrying it for the guys. So we are actually checking their wallets to find these things”, Dhaliwal says.

Venues like the Rogers Centre and the Air Canada Centre have metal detectors for their major events. But Dhaliwal that with other events the weapon-checking equipment used depends on the nature of the event, with security companies tending to bring in their own metal detectors to ensure the safety of everyone.

← Guide to Respond to an Active Shooter Is Your Professional Monitoring Service Reliable? →
